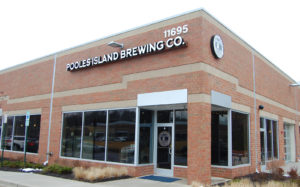 Pooles Island Brewing Company, recognized as Maryland’s newest craft brewery, has scheduled a public grand opening at its new location at 11695 Crossroads Circle, situated in the Greenleigh at Crossroads business community near White Marsh in Baltimore County beginning at 5 pm. Positioned just off Interstate 95 and MD Route 43, the event is free to the public and will offer attendees the opportunity to experience the self serve tap wall, the raspberry kettle sour, hazy double ipa and food from Cowboy Eats food truck. For additional information, call 410-630-9164.

The brewery occupies 10,000 square feet of space and features a 15bbl system and a 2bbl pilot system led by Head Brewer, Patrick Jones. Jones, who started his brewing career in 1998 with Big River Grille & Brewing Works in Nashville, has also mastered his craft at Gordon Biersch, Triumph Brewing Co., and Byway Brewing Co. He has won numerous awards at the Best of Florida Beer Championships, Indiana Brewers Cup and the Great American Beer Festival.

Jones envisions offering a core complement of six signature beers plus a rotating selection of seasonal and experimental brews, all emphasizing the use of fresh and local ingredients whenever possible. A 3200 square foot tap room will feature an outdoor terrace off the main room and a private area for special events. Food service at the facility is slated to include a rotating selection of popular local food trucks for patrons to enjoy on evenings and weekends.

Cenosillicaphobia means the fear of an empty glass,” stated Patrick Jones. “It is my job to make the goods available to fill it, whether it is light, dark, sweet or hoppy. Hopefully everyone’s fears will be dashed on a continuous basis.”

Pooles Island Brewing will serve as a welcoming beacon for local beer lovers and aficionados of fine craft brew. More than $1 million was invested into the construction and build-out of the facility, and the brewery expects to employ up to 10 people within the year.

“Our goal is to create a brewery that is respectful to the various traditional styles as well as push the limits of the creativity, explained Roger Bedard, General Manager of Pooles Island Brewing Company. “Our taproom will be inviting, relaxing and a place where you will want to spend an afternoon.”

The actual Poole’s Island sits near the center of the Chesapeake Bay at the mouth of the Gunpowder River. It is home to the oldest standing lighthouse on the bay, which was listed on the National Register of Historic Places in 1997. As part of the establishment of Aberdeen Proving Ground (APG) in 1917, the island was purchased by the Federal Government. APG relit the beacon in 2011 after 72 years of deactivation. The island is off limits to the general public as the island was used for bombing and shelling practice from 1918 through the early 1960s with unexploded bombs and shells remaining all over the island.