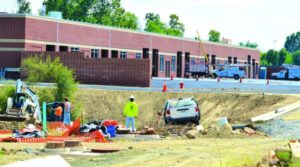 One of Leesburg’s newest developments is attracting attention even before it completes construction.

The Leesburg Tech Park has secured leases for two players in the tech/industrial community, Quantum Leap and Limatherm.

Quantum Leap is run by local entrepreneur Jim Miller and intends to set up its headquarters within 940 Sycolin Road. The company, which was developed to find solutions to future problems facing U.S. national security, chose Leesburg Tech Park based on the town’s growth potential and the amenities it could offer its workforce, a press release stated.

The two confirmed leases mean that Leesburg Tech Park has already achieved 20 percent pre-leasings before any of the buildings have even opened.

“We have a portfolio of over 20 million square feet,” said Matt Holbrook, of St. John’s Properties, the developer of Leesburg Tech Park. “It’s atypical for us to see a lot of leasing before buildings are done. It speaks to the fact that there is strong demand in the area. Things look very positive from this point on.”

Situated at the intersection of Sycolin Road and Miller Drive, Leesburg Tech Park was developed to support more than 160,000 square feet of research and development and flex space. In addition to the two confirmed tenants, Holbrook said there are a couple of leases pending and some prospects.

“There’s very strong momentum for these buildings,” he said. “We thought it would be a good location and it’s proving to be so.”

The tech park will include four buildings, with delivery of the entire development expected by spring 2020, Holbrook said. The first two tenants are expected to move in this fall.

It’s the developer’s first Leesburg project, but perhaps not its last. St. John’s also counts properties in Ashburn, Sterling and Arcola among its extensive portfolio. Holbrook believes the unique product offered at Leesburg Tech Park is what’s made it successful before its doors have even opened.

“We are attracting tenants from all types of different uses that don’t fit in traditional Class A [office space] or want something much nicer than traditional industrial. It’s a product type that we understand very well. It provides a very wide range, flexible environment for a lot of different types of tenants—everyone from high-tech startups to the service industries supporting rooftops in the area to after-school recreation uses. It’s a very broad kind of offering for folks that don’t fit in a traditional office, retail, [or] industrial environment. We’re everything they’re not,” he said.

More information on Leesburg Tech Park can be found at sjpi.com/properties/leesburg/flex/leesburg-tech-park.