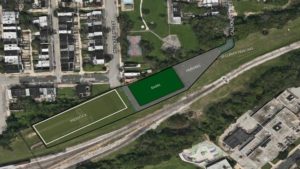 BALTIMORE, MD (August 23, 2017) – St. John Properties, Inc., has pledged $50,000 as a matching gift to support the plans of the First Mile Stable Charitable Foundation to construct a new horse stable for the Baltimore Police Department’s mounted unit, within the grounds of the B&O Museum in West Baltimore. The Foundation recently launched a fundraising campaign to attract the $2.5 million needed to construct the 12,000-square foot facility containing 12 horse stalls, a paddock for grazing and separate classroom and museum areas. St. John Properties, a Baltimore-based commercial real estate development and investment company founded by Edward St. John, was the first company to commit funding towards the project.

“This new facility will significantly improve the daily living conditions of the police department’s mounted unit, including many of the horses that have arrived from rescue situations,” explained Edward St. John, Chairman of the company and a member of the Board of Directors for the B&O Museum. “A modern structure is also better suited for Baltimore City schoolchildren to learn about the horses, and experience a behind-the-scenes look at their handling and care. We encourage local businesses and individuals to join us in this important effort aimed at establishing a new venue that will dramatically benefit the horses, while also providing educational resources and discovery for local youth.”

According to Courtney Wilson, Executive Director of the B&O Museum, the Baltimore Police Department’s mounted unit currently resides in substandard conditions in a 1970s-era former car dealership under the Jones Falls Expressway in East Baltimore. The group plans to initiate construction on the new horse facility this fall within the grounds of the 40-acre railroad museum. The mounted unit has served the needs of the Baltimore community since 1888 and is typically used for crowd control and appearances at community events.

“This new facility, in this new location, will powerfully impact West Baltimore,” Wilson explained. “It will provide a venue that will fuel interface and interaction between the police department and West Baltimore residents, including offering educational opportunities about the role of the police department and the care and feeding of the working horses. It offers the space needed to properly care for the equestrian unit, as well as establish a new classroom and museum to forward community-based educational initiatives.”

Wilson adds that, upon completion of the new facility, area schoolchildren and museum visitors will be able to access the site by train, with Baltimore Police Department officers available to teach educational programs. A separate fundraising team has been formed to raise the funds, without interrupting the annual goals and initiatives underway by the B&O Museum.