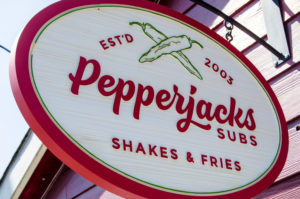 BALTIMORE (July 23, 2018) – Pepperjacks Subs, a family-owned restaurant known for its submarine sandwiches, Boardwalk French fries and milkshakes, has signed a lease with St. John Properties, Inc. for space within the retail component of Annapolis Junction Town Center, a mixed-use Transit-Oriented Development (TOD) situated adjacent to the Savage MARC Station in Howard County. The TOD is being developed in partnership with Somerset Construction Company, which last summer delivered The Residences at Annapolis Junction, consisting of 416 luxury apartment homes. Expected to open this fall, this represents the second location for the restaurant owned by Andrew and Lauren Granzow. Bill Holzman, Vice President of Retail Leasing for St. John Properties represented the landlord, and Bill Harrison and Austin Eber of Lee & Associates represented the tenant in this transaction.

“Our Scaggsville restaurant is operating extremely efficiently, and we reached a point where we have more time and expansion became a realistic possibility,” explained Andrew Granzow. “We consider the area surrounding Annapolis Junction Town Center a food desert, and believe we have a strong opportunity to seize the lunchtime traffic throughout a large radius, including the Fort Meade region. In addition, our original location is within close proximity to the building that is being vacated by Verizon Wireless and moving to Annapolis Junction, so a large number of employees coming to this location are already familiar with our concept.”

“Our original location has a classic country style with hardwood floors and old-time finishes, and our goal is to replicate this character in some fashion at Annapolis Junction Town Center, including the use of high ceilings,” Granzow added. “It is important to create a family atmosphere and establish this location as a gathering spot for the local community and a place to unwind and relax.”

“Pepperjacks Subs is an iconic destination for residents and businesspeople in the Baltimore-Washington, D.C. corridor, and attracting family-owned restaurants creates differentiation within our retail centers and mixed-use projects,” stated Richard Williamson, Senior Vice President of Leasing and Marketing for St. John Properties. “The two locations are approximately six miles apart, so we believe they will be able to capitalize on their brand in this section of Howard County. The concept also offers the perfect combination of food items and desserts to address the needs of early-morning commuters, local businesspeople and residents.”

Annapolis Junction Town Center is positioned in the southeastern section of Howard County, midway between the Baltimore and Washington, D.C. metropolitan areas. 10170 Junction Drive features frontage on MD Route 32, one of the primary east-west highway connectors in the State of Maryland, and is adjacent to the Savage MARC station, which is servedby the rail system’s Camden Line. The MARC system operates between Baltimore’s Inner Harbor and Camden Yard area, where it connects to Baltimore’s light rail system, and Union Station in Washington, D.C., where it offers connections to the Washington Metro subway network and Amtrak. Annapolis Junction Town Center is situated approximately four minutes from Fort George G. Meade and the NSA.

St. John Properties, Inc., founded in 1971, owns and has developed more than 19 million square feet of Flex/R&D, Office, Retail and Warehouse space in Maryland, Colorado, Louisiana, Nevada, Pennsylvania, Virginia, Utah and Wisconsin. The company was named “2018 Developer of the Year” by NAIOP, the Commercial Real Estate Development Association.  For more information about the company, visitsjp.mu9b0uf9-liquidwebsites.com

Pepperjacks and its subs, shakes and boardwalk fries expands to Annapolis Junction