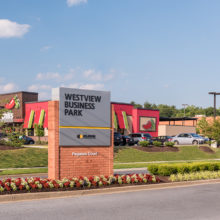 Since opening its first restaurant on September 11, 2011, MISSION BBQ has expanded rapidly nationwide and now manages more than 96 locations in 16 states. According to the company, that specific date was chosen because it was “ten years after our world changed forever and, in some way, we wanted to change it back.” Through partnerships with its customers and the communities where MISSION BBQ operates, more than $10 million has been donated to causes that support military servicemen, veterans and police officers including The USO, Special Operations Warrior Foundation, Semper Fi & America’s Fund, and numerous local charities.

“Over the past 10 years, Frederick has been one of our most asked-for communities and we cannot open fast enough at Westview Business Park,” explained Bill Kraus who, together with Steve Newton, co-founded MISSION BBQ. “We are extremely familiar with the reputation of St. John Properties as an exceptional developer and landlord and we are finally merging two great brands together. Restaurants perform extremely well along Buckeystown Pike and this site emerged as the clear-cut winner after an extended search. Our opening is also timed closely with the beginning of the annual barbeque season.”

The exterior and dining room décor of MISSION BBQ reflects its passion for America’s military with the inclusion of camouflaged tanks and vehicles, seating that resembles army barracks, weathered wall coverings and personalized pictures that salute community heroes. Each restaurant also reflects the local sports community with the display of memorabilia, images of local athletes and equipment. Each day at noon, service is halted in the restaurant so MISSION BBQ employees and customers can stand at attention and sing the national anthem.

MISSION BBQ will occupy approximately 50% of 5102 Pegasus Court, a single-story retail, with approximately 4,000 square feet of space remaining. St. John Properties is targeting additional uses to complement existing concepts that presently exist within Westview Business Park including Texas Roadhouse and Chili’s. More than 30,000 consumers, with an average household income approaching $90,000, reside within a three-mile radius of Westview Business Park and nearly 52,000 vehicles pass the business community from Buckeystown Pike on a daily basis.

“In MISSION BBQ, Frederick is getting an exceptional restaurant operator with a distinctive menu and, equally as important, a tremendous supporter of our local community,” explained Matt Holbrook, Regional Partner, for St. John Properties. “The company’s year-round philanthropic efforts are impressive and they work tirelessly to make a difference in the places where they do business. Based on the success achieved throughout their portfolio, we are confident that this location will become a significant and unique dining destination for the Westview area, Frederick, and beyond.”

St. John Properties, Inc., founded in 1971, owns and has developed more than 20 million square feet of Flex/R&D, Office, Retail and Warehouse space in Maryland, Colorado, Louisiana, Nevada, Pennsylvania, Virginia, Utah and Wisconsin. The company was named “2018 Developer of the Year” for the Nation by NAIOP, the Commercial Real Estate Development Association. For more information about the company, visit sjp.mu9b0uf9-liquidwebsites.com.