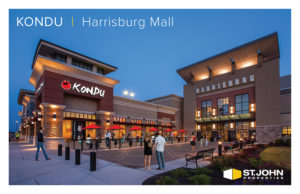 Kondu owner Ricky Chen describes the new restaurant concept as “the Japanese version of Chipotle or Panera Bread.” The menu is comprised of sushi-ritos, a made-to-order sushi burrito; hibachi-style items such as Teppanyaki which features chicken, beef and seafood cooked on an iron griddle; and other items such as chicken, beef and shrimp teriyaki. A customized drink program includes Asian bubble tea. Chen, a seasoned restauranteur who owns five Hibachi Grill restaurants in the Harrisburg area, explained that Kondu is designed to capitalize on the lack of quick-serve Asian restaurants in the local marketplace. He plans to expand with new locations in Central Pennsylvania.

“Each of our restaurant offerings are extremely popular among businesspeople during the lunch hour, and throughout the day and evening as shoppers take advantage of our food variety,” explained Vicki Keating, General Manager of Harrisburg Mall. “Kondu is backed by an ownership group with an extensive track record of success in the restaurant industry, and this addition provides a compelling new dining option for the local community and area businesses.”