Our commitment to community goes far beyond the real estate at The GATE. It’s a commitment to being a good corporate citizen and to doing what is right. St. John Properties is privileged to provide a lasting reminder of the dedication of our Military, their Families and the many individuals touched by those who support our Warfighters and those who have made the ultimate sacrifice to preserve and protect our freedom and our Country. Learn more about the ‘Fallen Star’ Memorial and the Memorial in honor of Gold Star Mothers and Gold Star Families. 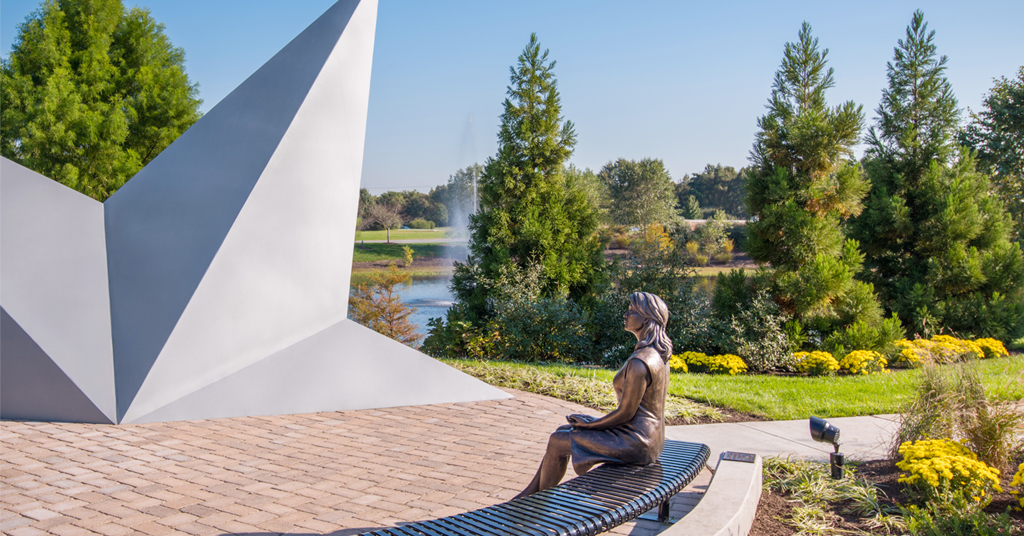 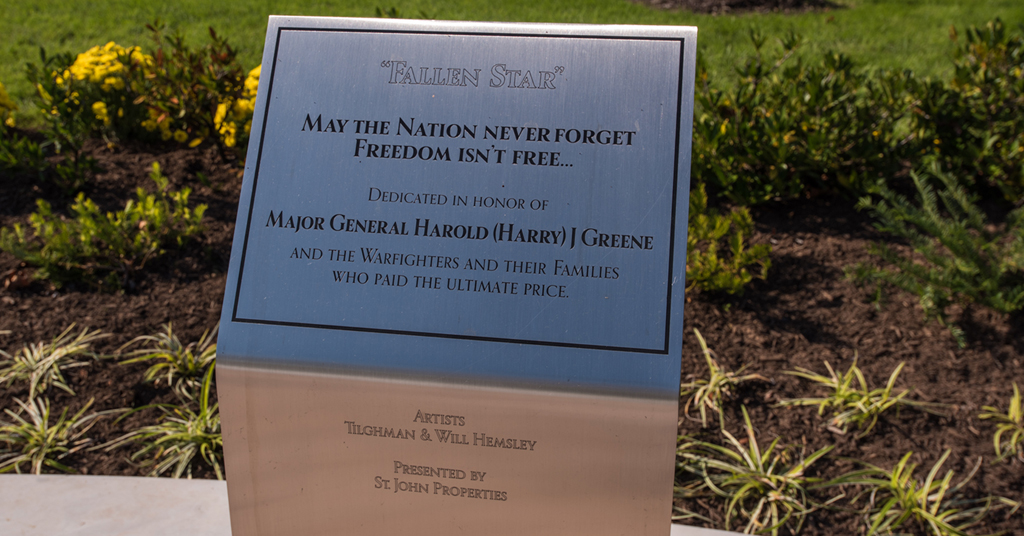 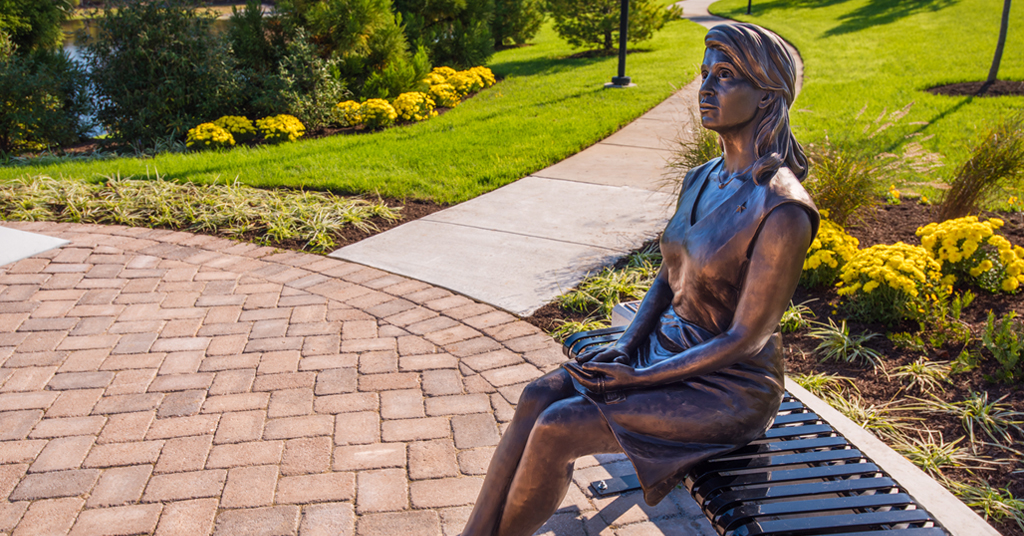 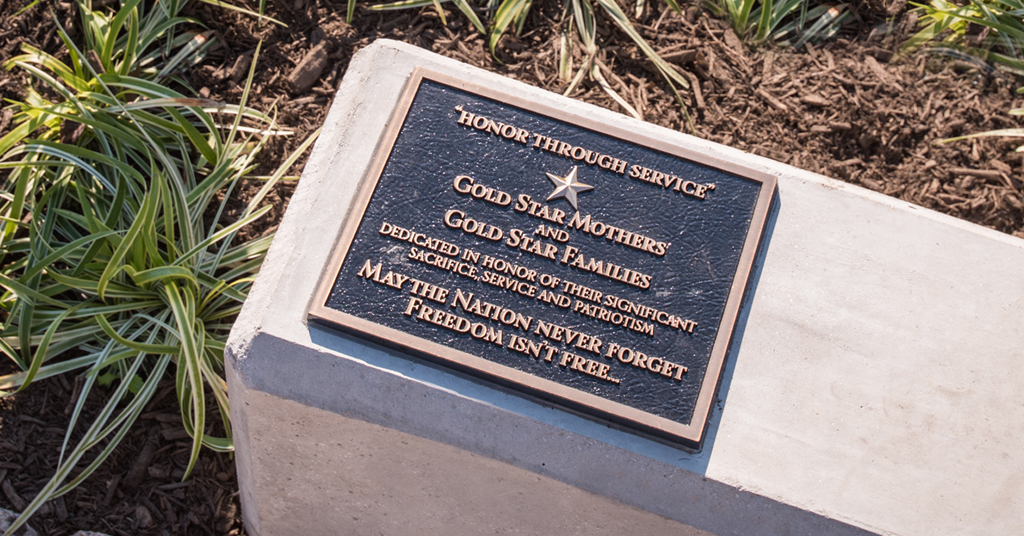 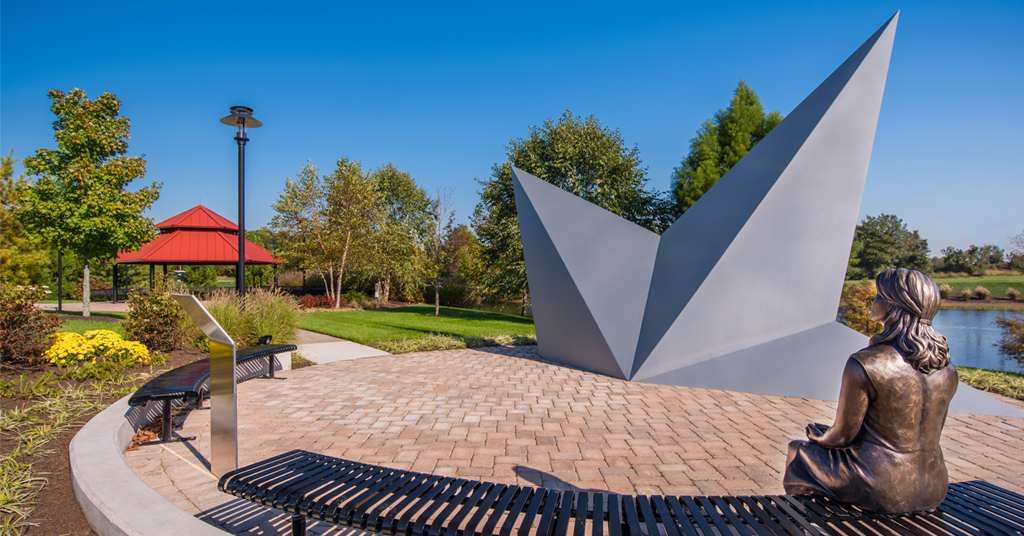 Major General Harold (Harry) J. Greene was born in Boston, MA on 11 February 1959, and grew up in Schenectady, NY. He was a man who was committed to his family, friends, Soldiers and Country. He lived life to its fullest, always believing in working for the betterment of all, and loved being a part of teams that solved complex problems. In a 34-year career that began at Fort Polk, LA, he earned a reputation as a leader with an exemplary work ethic, a sense of humor, humility and an ability to inspire those around him. He loved being a United States Army Soldier and would often greet those around him with, “What have you done for Soldiers today?” He was an avid fan of all New England sports teams and loved cheering on the New England Patriots. He was even fortunate enough to see his beloved Boston Red Sox win two World Series.

Major General Greene was promoted to brigadier general in late 2009, and served as deputy commanding general of United States Army Research, Development and Engineering Command at Aberdeen Proving Ground and the commanding general of Natick Soldier Systems Center. He was promoted to major general in 2012, and served as the Deputy for Acquisition and Systems Management at the Headquarters of the Department of the Army. In January 2014 he was named deputy commander of Combined Security Transition Command-Afghanistan during Operation Enduring Freedom-Afghanistan until he was killed in action on 5 August 2014.

Major General Greene was married to COL (Ret.) Susan Myers, Ph.D. Dr. Myers served as a professor at the U.S. Army War College in Carlisle, Pennsylvania and now serves as an executive with ManTech International Corporation. They have two children, a son, Matthew Greene, who is a U.S. Army Captain, and a daughter, Amelia Greene.

The Gold Star Mothers Maryland Chapter, Inc. is an organization comprised of mothers whose children died while in military service or as a result of that service, or are missing in action. Their mission is “finding strength in the fellowship of other Gold Star Mothers who strive to keep the memory of our sons and daughters alive by working to help veterans, those currently serving in the military, their families and our community.”

As members of the National American Gold Star Mothers, Inc. organization, a 501 (c) 3 National nonprofit Veterans Service Organization, they are governed by the National organization’s constitution and bylaws; however, much of the service is done at the chapter level.

Maryland Chapter members volunteer many hours at the VA medical centers, Walter Reed National Military Medical Center Bethesda, the USO, and other veterans service and community organizations. The Chapter frequently partners with organizations that support veterans and active duty service members and their families. They also actively participate as guests and speakers in many patriotic events throughout the year. In all of these activities, they heal together while helping others.

The American Gold Star Mothers, Inc. was formed in the United States shortly after World War I to provide support for mothers who lost sons or daughters in the war. The name came from the custom of families of servicemen hanging a banner called a Service Flag in the window of their homes. The Service Flag had a star for each family member in the United States Armed Forces. Living servicemen were represented by a blue star, and those who had lost their lives were represented by a gold star.

Today, membership in the Gold Star Mothers is open to any American woman who has lost a son or daughter in service to the United States. On the last Sunday in September, Gold Star Mother’s Day is observed in the U.S. in their honor. The Gold Star Mothers continue to concentrate on providing emotional support to its members, doing volunteer work with veterans in general and veterans’ hospitals in particular, and generally fostering a sense of patriotism and respect for members of the Armed Forces.

The term Gold Star Family is a modern reference that comes from the Service Flag. These flags or banners were first flown by families during World War I.